It is always nice to see the passion of an artist that has spent their entire life honing their craft. You just have to respect them, knowing it is something they eat, live and breathe daily – even if their entire life is only 10 years. Enter Esteban Castro, the Cuban-American Jazz prodigy. Yes, I know, this word gets thrown around so much it becomes a boring cliché. Trust me, I looked for another word to replace it when describing him but it’s true, his talent is “something that excites wonder or amazement” as the dictionary defines.

At 10, Esteban’s reputation already precedes him as a musician, pianist and composer. He successfully funded the making of his debut album, In the Making via a KickStarter Campaign, in which a portion of the album proceeds was used to purchase instruments for underprivileged musicians. Okay, so add humanitarian to his list of titles. I know many grown adults that can’t even pull that much off. He then records an album with 13 original compositions and five cover songs paying homage to some of his favorite artists. So, that’s 18 songs total. Then his album is donned numerous awards including the 2013 Herb Alpert Young Jazz Composer Award from the ASCAP Foundation, making him the youngest recipient to date for his song “For Chick.” In addition, he was recognized by Downbeat Magazine winning the Best Lead-Sheet Composition for “Painted Face,” a song on his debut album. 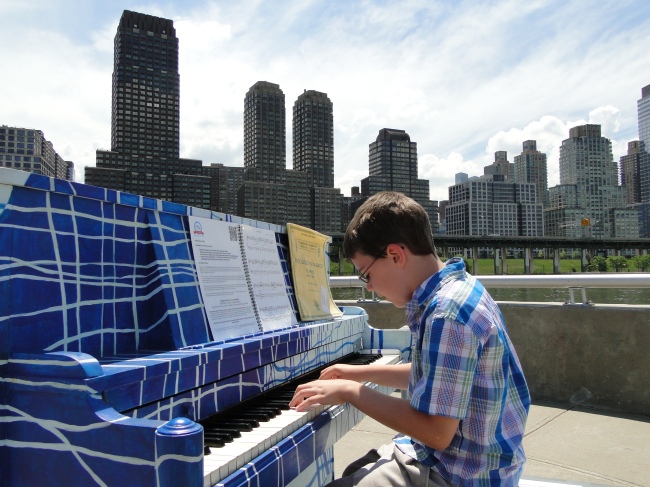 Super fancy, right? Well the accolades don’t even hold a torch to actually hearing his music. That is when the magic happens. Esteban successfully couples the simplicity and joy of a child with the discipline of a master in his compositions. His music has a subtle and inviting way of engaging the listener to take them through a sonic journey of rifts and clefts. His greatest appeal is in the transparent joy that he infuses in every piano stroke, every note, leaving the audience truly touched and uplifted by his utter lack of ego. If only more artists could take a page out of the Esteban Castro book, and play without pretention, without any grandiose ulterior motives other than to simply share his music.

When asked about the rave reviews of In the Making Esteban humbly states:

“I’m very fortunate and honored that my Debut Album In the Making has received critical acclaim, along with ASCAP and Downbeat awards. My dream is to grow as a musician, and continue to compose and share my music. I’ve had many great influences, and I hope to inspire other children to find expression through the universal language of music.”

Jazz lovers and general music lovers alike will find something to resonate with on In the Making. Whether it’s the upbeat, playful melodies in my personal favorite track “For Chick” which opens the album by paying homage to legendary Jazz musician Chick Corea, or the effortlessly complex title track “In the Making,” Esteban keeps the listener wanting more. I don’t know what else to say except listening to In the Making makes me incredibly happy! That in itself counts as a tremendous feat in my book. If this is just the beginning, I look forward to what the future holds for one of Jazz’ not only youngest but brightest luminaries.

Observations on life in all its random glory